Located in Westminster, the Harold Pinter Theatre is famous for its immense history, luxury horseshoe-shaped balconies and of course, for its intimate shows. The theatre is extremely rich with history and is better known as the Comedy Theatre, which the venue was called for over 100 years. 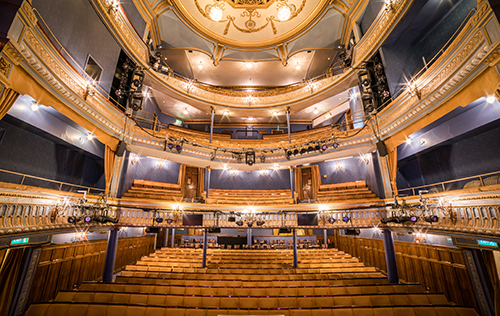 The History of Harold Pinter Theatre

Thomas Verity was the theatre’s original architect and would oversee the construction of this Grade II listed theatre. The theatre would first open its doors in 1881. During this time, there was a full seating capacity of 1,180 people. Now, the seating capacity allows for 796 total patrons to be seated at one time.

Built in just six months, the theatre was first called the Royal Comedy Theatre. This name would be short lived as the venue quickly dropped Royal from the name in 1884. Its new name would remain for well over 100 years before being changed to The Harold Pinter Theatre on October 13, 2011.

The theatre’s current owners, the Ambassador Theatre Group, stated that the name change is in remembrance of Harold Pinter, one of the world’s biggest dramatists.

For a brief period in time, the theatre was completely shut down for a major renovation. This renovation would occur in the mid-1950s. Reopening in December of 1955, the theatre changed forever, but the auditorium remained virtually unchanged. This has allowed the theatre to be a timeless classic amongst visitors and would still be recognized by Verity due to the famous, three-tier balconies that are seen.

Set in 1843, the Theatres Act required all scripts to first be approved before being presented on the big stage. This archaic act forced many scripts to be turned away and the theatre played a big role in the change of the Act in 1956.

During this time, the New Watergate Club would open and would allow plays to be accepted under specific conditions. This allowed many plays that were otherwise banned to take place. This was a major turning point in theatre history.

The stalls are closest to the stage, but the Balcony seating still provides exceptional views with ease of visibility at all times. Prices range from £10 – £85 for premium seats. A general rule of thumb for the following pricing tiers is seen:

The facilities contain air conditioning, a cloakroom and a shop. There is ample toilets seen with handicap accessible stalls offered as well. Staff is always willing to assist handicap patrons with anything that is needed.

There are 3 bars seen that offer water, spirits, wine and soft drinks. The bars are conveniently located in the Foyer, Stalls and Royal Circle levels.

A basic shop that offers sparse food items and an array of merchandise that can be purchased.

Directions to the Theatre

The theatre is located on Panton Street in London. There are a variety of ways to get to the venue, including:

The easiest, most direct route by auto would be to take A4 past Fortnum & Mason directly to the theatre, which will be on the right.

Car parks are readily available in the area and are all within a short walking distance of the theatre.

Sunny Afternoon is currently playing at the theatre and will be playing all the way into January of 2015. The theatre has not yet released future shows that will be added. Guests can purchase tickets online or at the door. Tickets to any showing at the theatre can alternatively be purchased at ATG Tickets.

You can find the address here, get contact details here and take a look at the seating plan here.

This website uses cookies to improve your experience while you navigate through the website. Out of these cookies, the cookies that are categorized as necessary are stored on your browser as they are essential for the working of basic functionalities of the website. We also use third-party cookies that help us analyze and understand how you use this website. These cookies will be stored in your browser only with your consent. You also have the option to opt-out of these cookies. But opting out of some of these cookies may have an effect on your browsing experience.
Necessary Always Enabled
Necessary cookies are absolutely essential for the website to function properly. This category only includes cookies that ensures basic functionalities and security features of the website. These cookies do not store any personal information.
Non-necessary
Any cookies that may not be particularly necessary for the website to function and is used specifically to collect user personal data via analytics, ads, other embedded contents are termed as non-necessary cookies.
SAVE & ACCEPT